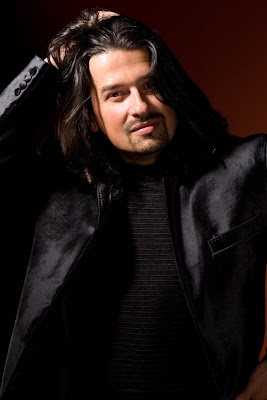 Dalibor Jenis sings Ford in Verdi's Falstaff at the Royal  Operas House. Jenis comes from Bratislava, but his good looks are simmeringly Italianate. Pity that in Robert Carsen's production, he's costumed in "ludicrous Texan cowboy disguise". Says Richard Morrison in the Times, "that's doubly sad, because Jenis is the one performer who injects real emotion into this superficial show."

“Everything in opera comes from Italy”, Jenis told me three years ago. “Italian is the language of music, my second mother language”. We discussed Italian roles and the balance between singing and acting.

"I think acting is as important as singing. Years ago, you could have fat singers who didn’t move much on stage but had wonderful voices and everyone was happy. Now people expect more.” Jenis is interested in the way small details and movement can make a characterization stronger. “I search every role to find moments when I can express things better”. Sometimes it’s as simple as changing position subtly. “I don’t like to be like a machine, doing exactly the same thing every time”, he says. “In life, things change all the time”. This keeps performance fresh and natural. “Even when we’re not singing, there is a connection between singers, which an audience can feel very clearly”.

Good acting isn’t all obvious movement. When Jenis was very young, he watched a Carmen, where the singer was in her mid fifties. She sang the Habanera so effectively that she was utterly convincing without having to overact. “She was so strong, she didn’t have to move a lot or “be sexy”, she acted with her face and her voice. I said to myself, “This is Carmen”. Read the full interview HERE.
at May 16, 2012

Email ThisBlogThis!Share to TwitterShare to FacebookShare to Pinterest
Labels: Verdi