Why I defend Bianca Jagger 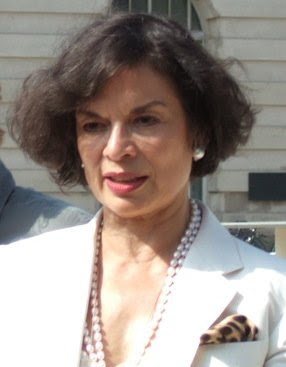 Yes, I will defend Bianca Jagger taking photos during Einstein on the Beach. Because it was Einstein on the Beach. Indeed, I'd say she got a lot more from the piece than the snotty critics around her did, some who clearly did not know the piece. Most reviews completely missed the point of the piece, which redefined all the usual parameters of opera. Glass and Wilson were experimenting with a new genre before most anyone else. Miss that, and miss the whole point of the exercise.

Indeed, sitting up in the balcony, I could see many flashes iin different parts of the building and thought they were a kind of performance art, a perfectly valid extension of the idea of Einstein as celebrity admired by millions who haven't a clue what he really did. So a celebrity like Bianca Jagger has every right to "participate".

Besides, Bianca J was enjoying herself and engaging with the piece, which is more than can be said of some of the superficial writers who went because it was free, without a clue about composer or concept. Interesting that those most opposed to Bianca are those who know least about the work itself. Bianca's real. So, too, Rupert Christiansen who loathed it. (They should have sent Ivan Hewett who has a better handle on Glass).  Both had genuine responses, far more sincere than those who just follow received opinion and pretend. It's not what you think that counts, but why. My response is HERE, written without programme notes but with general background.

In any case, Einstein on the Beach is conceptual. It's stream of consciousness, like a dream with images that aren't processed. Philip Glass's music is like modern society, where we're bombarded with technology and processes out of our control. That's why the onus is on the observer - a participant - to decide when to come or go, when to doze, etc. You don't "need" to take in every note or word. Or non-word.  Hence the repetitions and irrelevancies. As in the real world, you don't learn til you filter. So Hooray for Bianca, reacting like a human being, and taking souvenirs to preserve the moment.  [Now it emerges that she is a close friend of Glass and Wilson, who have supported her actions. If the composer and director are happy, why should critics who don't know the piece or the ideas behind it object? Or perhaps it's too much for big egos to accept that a woman might know more about than they do?]


But not all music is Einstein on the Beach. Tonight, I was at a George Benjamin concert where the music is so refined that every microtone counts.  A friend mentioned someone texting throughout, which was distracting. So he asked the person to stop, but other people turned on him instead. What's the point of going to music and not listen? And if you don't care, why spoil things for others? This boorishness is getting too common. Not long ago, at the Royal Opera House, a man started sneering loudly even as the Overture began. He'd come to get his kicks from being nasty: no interest in the opera itself. More money than sense. What kind of person needs to prove something by wrecking things for others? As my friend discovered at George Benjamin, if you stand up to boors they may call you a snob or worse, just because you dare care about what you listen to.

Is it "elitist" to listen these days? Two years ago, Alex Ross decreed that audiences should applaud when they wanted. But the whole point of going to performance is listening. Pay attention and respect that others around you might want to be paying attention too. It's as simple as that. Part of the problem is that concert going is perceived as consumer product, not as a form of enlightenment.  Buying a ticket does not "buy" an artistic experience. It's only when you engage with what you're hearing that you get full value. For most people these days, it's enough that they can tweet their pals or whatever, and prove something without having to actually particpate emotionally. Bianca Jagger's wrong to disrupt others, but her heart is in the right place. And she doesn't disrupt George Benjamin.