"How can animals talk?" My Dad asked my three year old brother. The kid thought seriously for a moment, then said with great solemnity. "Only when they wear clothes".  That's the perennial problem posed by Leoš Janáček's The Cunning Little Vixen, which starts the new Glyndebourne season this weekend. On a very superficial level, one might assume that the opera is a nature tale, since it's based on very shrewd observation of animal behaviour. We live in technologically cocooned urban times. Ninety years ago, Janáček and his contemporaries were a lot closer to the countryside and to nature. In any case, Janáček was inspired by a cartoon series in a newspaper.  So from the very start, The Cunning Little Vixen was allegory, not fairy tale. If you think it's cute and Disneyfied, the joke is on you! (photo : Peter Trimming) 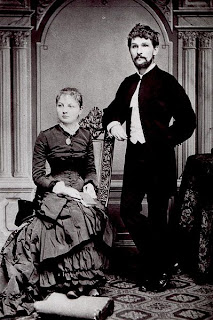 For Janáček, The Cunning Little Vixen is satire. One of the most powerful themes in the opera is the way animals co-exist with humans, rather like a subculture on the margins of society.  A good metaphor. Foxes adapt. In Soho, for example, thousands of urban foxes dine on the discards of exotic restaurants, and retire to the Royal Parks for rest and recreation. Foxes can't be domesticated. Perhaps thee real clue to the meaning of The Cunning Little Vixen lies in Janáček's relationships with women which I've written about many times (like this Janáček's Dangerous Women). Women represent society and social mores. Janáček fell in love with 14 year old Zdenka Schulzová, a "vixen" so innocent and unworldy that he didn't connect her to what her family represented: solid middle class respectability, and Germanophile, (ie authority) for that matter. He was poor, Czech and an outsider, yet the family took him in and supported them, even when the composer wanted a divorce (extremely scandalous in those days). Yet Zdenka never ceased to love him, though he treated her and their daughter abominably (possibly hastening Olga's death).

Significantly, Janáček didn't leave Zdenka. There's evidence that he still slept with her late in life. And the fact that he pursued women who were not available to him speaks volumes. Was he more into pursuit than entrapment? Had Stösslová responded, would he have suddenly turned tail, all fervent protestations to the contrary? Philanderers often need an excuse not to commit, however flowery their passioins. So The Cunning LittleVixen affirms the values of non-domestication. Is "Vixen Sharp Ears" Zdenka as she might have been, and also Janáček's psychological rationale for not setting up home with Stösslová or anyone else? (he may have slept with others). From The Diary of One Who Disappeared, Janáček is fascinated by feral women. Notice that Terynka is a gypsy. Significantly both the song cycle and the opera were inspired by newspapers, for adults. Janáček anthromorphizes, and transposes dangerous feelings.

That's why The Cunning Little Vixen is so free and so joyous. Janáček is indulging his anarchic side, merrily sending up the stultifying convention he couldn't shake off in real life. Thus the music is exhilarating, full of energy and wit, It leaps and dances like a pack of playful young foxes who haven't yet learned fear. This opera was one of the composer's favourites because he could poke fun at the human world and its foibles. The Vixen mocks the conformist hens who sell their souls for comfortable living. Like many women, and men, too, for that matter. The Dog is miserable because he's unnaturally celibate - like the Priest and Schoolmaster. The Poacher gets married and the Gamekeeper returns to the forest. The opera ends, not in misery, but in glorious triumph. Just as the vixen lives on, so do the frogs, insects, trees and other organisms. Is the Gamekeeper really alone? Whether he dies or not, he's at last at one with the eternal cycle of growth and renewal. So he and the Vixen have the last laugh after all.

One of the reasons I'm so fond of the 1954 Komische Oper Berlin production (Das schlaue Füchslein) conducted by Vaclav Neumann and directed by Walter Felsenstein is because it was made just after the war, not long after the Soviet Occupation, and under Communism.  (watch clips here and here) That audience would have known all about surviving in harsh conditions, and also about the consequences of conforming to rigid authority. They were fooled by "realism". The original artiist and the composer didn't see it realistically, either. The animals look like human beings, dressed up in corny costumes, which is a telling comment on regimes of all kinds. It's kitsch, but howlingly funny because it's subversive, playing along with convention but sending it up. Like Janáček, that audience could let off steam without getting into trouble. Like crafty urban foxes, those Berliners meant to survive.

Please see my numerous other posts on Janáček (more Felsenstein links, photos etc) and related subjects. My work is original so please don't borrow my ideas without acknowledgement.