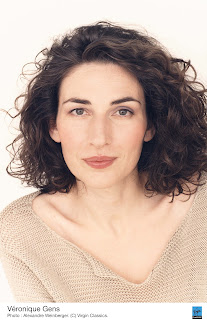 Véronique Gens's recital  at the Wigmore Hall was an almost ideal distillation of of the belle époque.in song. Over the years we've heard many specialists in French song at the Wigmore Hall, but Gens perhaps outshines them all.  With her background in baroque, lucid purity comes naturally, but she sings with exceptional intelligence. It's hard to explain why she's so distinctive, but her final encore (of three) might suggest an answer. Roses, jasmine and orange blossom infuse Gabriel Fauré's Les roses d'Ispahan. The vocal line moves gently like the breeze in the text. Yet the song is not about flowers but lost love. It's all the more poignant because it's so subtle. Gens doesn't dramatize, but lets the perfumed elegance convey depth of emotion.

Henri Duparc's L'invitation du voyage (1870)  is so famous that it's true meaning can be missed.The poet is Baudelaire, after all.  The piano part (Susan Manoff) is limpid and delicate. These rippling waters might suggest Schubert, but the idiom is entirely different. No "gothic" histrionics here. The passion is cool but sinister. Similarly, Duparc's Romance de Mignon (1869) is decidedly un-German though it's based on Goethe's Mignon song Kennst du das Land.? The drama's more muted, though the feelings are just as deep. These days it's fashionable to disregard idiom but for me that's bad taste. What's the point of performing different composers in the same way? Musically-informed is much more literate. Gens and Manoff show how Duparc's Mignon springs from a different aesthetic. Gens followed with Debussy's Fleur des Blés (1881) and Nuit d'etoiles (1880) which are almost her signature tunes. Her recording of Debussy, Fauré and Poulenc with Roger Vignoles (2000) is very good indeed.

Normally I don't describe what a singer wears, but Gens returned after the interval in a remarkable dress slit up to her midriff, but discreetly held together with tulle. Strikingly elegant, raising gasps of admiration from the audience. She seemed inspired, her performance in the second part of the programme quite divine. Like the hummingbird in Ernest Chausson's Le colibri (op2/7 1882) Gens glistened "comme un frais rayon s'échappé dans l'air". Her Les papillions (op 2/3 1880) hinted at erotic secrets in a refined manner. The sorrow in Les temps de lilas (op 19 1886) was expressed with elegant dignity. Gens and Manoff concluded with seven songs by Reynaldo Hahn. Hahn imbibes from exotic sources, so idiosyncrasic and so over the top. In three songs from Études latines (1900) Lydé, Tyndaris, Pholoé), he gets carried away with Leconte de Lisle's elaborate fanstasies of fake Antiquity. Gens and Manoff catch Hahn's effusive high spirits.  These put the famous A Chloris (1916) into context. Hahn's hamming up again, this time with Bach. Beautiful as the song is, it's mischief in music. Appropriately, Gens and Manoff concluded this evening of songs ostensibly about flowers and birds with Hahn's Le printemps (1899). Hahn's ebullient, exuberant and exhilirating - banished are the "flowers of evil". "Te voilà, rire du Printemps!", sang Gens, with a glorious flourish.
at May 11, 2012