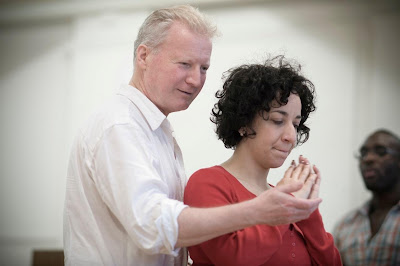 Vivaldi's L'Olimpiade iis a rarity, but this year, like buses, three come along at once. Garsington Opera at Wormlsey's production is probably most interesting as the director is David Freeman. Garsington Opera has always specialized in baroque treasures, and Freeman has directed all three Vivialdi operas there so far. The conductor will be baroque veteran Laurence Cummings. This will be the one to go to! It starts Sunday, and a few seats are still available.

"We did L’Incoronazione de Dario, from Vivaldi’s early period, La Verità in cimento (see review) last year, and now L’Olimpiade, from much later. This is probably the finest - we’ve saved best for last”. Though not, hopefully really the last as there are at least 20 more Vivaldi operas around.

"In L’Olimpiade, Freeman says there is some “absolutely beautiful music and it’s genuinely touching too. It’s not just pretty tunes. The music cuts pretty deep, even if the plot’s a concoction”. L’ Olimpiade is based on a text by Metastasio which was also used in other operas. Audiences would have had printed texts available, though not sheet music which was expensive to copy, so the plots would not have been wholly unfamiliar. “So there wasn’t the same close relationship between text and music that you get in Mozart or even in Monteverdi". Contemporary audiences might have enjoyed these operas much in the way that popular modern shows string together good tunes around a storyline."

“Another thing about Vivaldi”, says Freeman, “is that we tend to think of baroque as Handel. They were almost direct contemporaries, Vivaldi (1678-1741), Handel (1685-1759). But Handel was a German composer writing in Italian for an English audience, so naturally he didn’t go in for very complicated plots but for rather sublime situations. Vivaldi is different. He’s a Venetian writing for Italians, even in the Venetian dialect, for Venetian audiences, who could understand . So he was able to do a lot more, with text, with comic wit, a lot more madness. So there are more arias, even if they’re shorter, and lots more recitative. So in comparison with Handel who can seem quite noble, Vivaldi might seem more scrappy, but that’s what makes Vivaldi lively”.

David Freeman is an extremely experienced director. Please read this interview in Opera Today, in which he talks about Vivaldi and how he makes drama come alive.