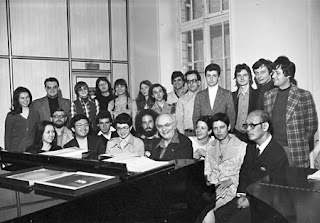 "Jubilation", the title of a South Bank semi-retrospective on George Benjamin and the title of his 1985 work for large orchestra and massed chldren's ensembles. Jubilation opened the Sunday Night concert at the Royal Festival Hall. Almost certainly the young George Benjamin himself must have attended concerts here at some time. As the various school choirs and ensembles filed onto the platform, my heart leapt with joy that a new generation would be able to take part in a musical experience  like this. The audience was filled with family and friends, and some very young siblings indeed. So well behaved that they were a credit to enlightened parents. Even if the very little ones cried, that was fine. When children are brought up like this, they learn to listen, not only to music, but to themselves and to others.

Jubilation mixes "difficult" music with the freedom of music even those without much formal traing can join  Quite complex sections with unusual instrumentation blend with a recorder band and vocal ensembles, whose variety allows each a special voice, not submerged in the mass. The big minus was that Jubilation wasn't immediately followed up by Ringed by the Flat Horizon, a strikingly advanced work written when Benjamin was only 19. That should have stunned the students, some of whom were in their teens, too, and perhaps spur them on. The photo shows George Benjamin aged 16, Myung-whun Chung aged 23 and Olivier Messiaen. Would that these youngsters had such enlightened teachers! When teachers impose their own limitations, they destroy the creativity that proper teaching should inspire. Benjamin shows what can be done with an open mind. Hopefully, these youngsters will learn from him and from their enlightened parents. 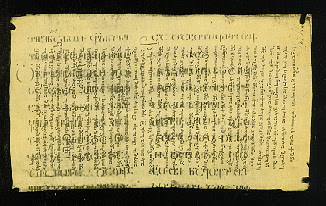 Benjamin knows how to communicate. "You've heard Ligeti", he told the students. "It's the scariest music in 2001 Space Odyssey". Even if Kubrick was before their time, they got that new music doesn't have to be difficult to respond to emotionally.  "It's very slow, like it's underwater", he said, describing Ligeti's Lontano.  Instead of describing his Palimpsests (2002) in technical jargon, he explained what palimpsests are, so the idea of cross and counter layers in music is easier to visualize in a vividly non abstract way. This is one of Benjamin's "greatest hits". perfectly accessible even for those who don't normally listen to new music.

Benjamin also made Ligeti's Double Concerto for flute and oboe sound fascinating. "The bass flute is a monster!" (or words of that effect), so the work can be heard as drama, the different voices of the different flutes (Samuel Coles) conversing with oboe (Gordon Hunt) and the Philharmonia Orchestra.  A pity that the programme was planned so the gaps between pieces were inordinately long. Music like this weaves its magic when you're properly paying attention. When the gaps are filled with noise, movement and trivia, the spell is broken.

The previous evening, Nicholas Collon conducted the London Sinfonietta in the Queen Elizabeth Hall in a much more focussed programme that highlighted Benjamins's more chamber oriented music. Flight (1979) for solo flute, (Michael Cox) inspired by the sight of birds soaring afloat, and Antara (1987) where panpipe sounds are expanded and developed by computer ((Benjamin's stay at IRCAM). These blend with flutes played in  vibrato-free "medieval" style, then growing in sophistication. "Deep, growling trombones" and metallic perecussion "invoke the real power of computerized keyboards- huge sustained microtonal chords , sweeping glissandi, ....all derived from the original pan-pipes" says Benjamin in his articulate programme notes. "At the largest climax the orchestral anvils in a myriad of metallic sound ...towards a coruscating but tranquil conclusion".

From panpipes to Ligeti's Horn Concerto where the soloist (Michael Thompson) is supported by a team of other horns (rather like a South American pipe ensemble), and then to Benjamin's Duet for Piano and Orchestra (2008), soloist Tamara Stephanovich, closely associated with the dedicatee Pierre-Laurent Aimard., who played it at the Proms in 2010. It's s a different kind of concertante, where soloist and orchestra don’t interact in the usual way, but observe each other, so to speak. Then, with a punchy crescendo, it’s over. Benjamin’s music often sounds pointilliste, like detailed embroidery, but here there’s sharpness in design, and clarity of direction. Listening this time, I realized how muscular Benjamin's music can be.  One oif the highlights oif next year's Royal Opera House season will be Benjamin's first big opera (100 minutes, full orchestra) Written on the Skin. I adore his Into the Little Hill (see more HERE) but have been worrying if Benjamin, a notoriously fussy writer, could produce for the big house.  Hearing the inherent drama in his Duet for Piano and Orchestra, I'm pretty confident Written on the Skin will be good.

--------------------
Odd that Gillian Moore didn't mention the Queen's Jubilee in her opening speech, particularly as the South Bank is so closely identified with the optimism that marked the Festival of Britain and the Queen's coronation.  What a very different place this country is now. The Thames still flows past the South Bank, but was used recently for full scale military manouevres to "protect" the Olympics. Fortunately Moore was wise enough not to make too much of the Cultural Olympiad business, which claims credit for many things which would have happened anyway, even the Proms.
at May 14, 2012