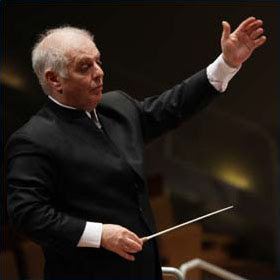 Daniel Barenboim wins gold! Magnificent Beethoven 9th at BBC Prom 18. Beethoven's monument to tolerance, with the West-Eastern Divan Orchestra, and what they stand for : who could fail to be moved?  This was an act of faith. Whether or not music can change the world, we don't know, but if we don't believe in hope, we might as well give up.

Of course much of the appeal was  emotional. Who could not fail to be moved by the symbolism?  The finest moments came when the choruses broke into song. It was better that they were carried away with enthusiasm: much better this heartfelt freedom than polished perfection. The chorus on this occasion represented the world, voices of all kinds united for a shared ideal. Everything else fades into insignificance. This was a Prom that will live forever in history.

Perhaps the unconsionable Zil lanes served a purpose, for this time they were ferrying Barenboim, a genuine hero, to the Olympic stadium, rather than corporate freeloaders. Opening ceremonies of the Olympics are supposed to be grandiose to the point of crass, so there's no point in analysing this comic book rebranding of British history. Extravaganzas like this aren't even about taste. Like junk food, they're a great treat as long as you don't dedicate your life around them. Simon Rattle and the LSO (odd combination) let their hair down. Gosh, doesn't "real" music sound good in comparison.  But it was poignant that the NHS workers had  given so much of their time gratis, when their jobs are threatened because of cuts. No matter, everyone else volunteers, and the sponsors make profits.

The real Olympics started when the athletes marched in. Marching behind flags always bugs me, even when the ostensible goal is co-operation. But look at the faces of these athletes. They are young, mostly non-intellectual and non-political. For them it's the biggest moment in their lives because they feel they are part oif something greater than themselves. Those who come from poor countries, without the huge machinery of state support, I admire most because they have a dream. The IOC uses them to justify its existence, though it would do lots more for sport if it used its resources in ground level support in developing nations than in a mega-advertisng beanfeast.

Nobody seemed to notice why the Ghanaians were wearing  black and red (Ghanaian colours of mourning) instead of kente finery. Their president has just died, a man almost universally admired for his decency, honour and high ideals.  He was proof that genuinely good people can rise above the shabby scams that characterize politics the world over. His death is a loss to all of us, not just to Ghana. So when the cameras turned to Daniel Barenboim, it felt like valediction. The Olympic ideal has been horribly, disgracefuly corrupted, but moments like these remind us of what could be. The Opening Ceremony was huge fun, but doesn't change the fact that there's a lot wrong with the IOC mentality. Peddling McDonald's and Coca-Cola doies nothing for health and fitness, and contradicts the idea that all nations are equal.