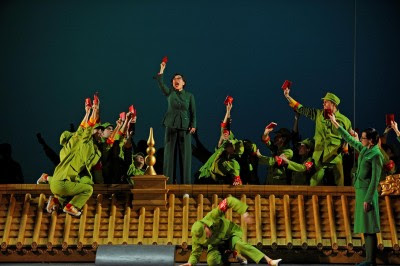 A dear friend recommended the Paris production of John Adams Nixon in China. Since the Peter Sellars version upsets me so much I couldn't face watching but now I've got round to seeing it and my view of the opera is transformed. This new production, from the Théâtre du Châtelet, directed by Chen Shi-zheng, is exceptional. It brings out levels of meaning and beauty in Adams's work, and completely reedefines the opera. The trouble with the old Sellars production for the Met was that it was crudely literal: a series of tableaux based on newspaper images, with no attempt to delve deeper. It was so superficial that it put me off the opera altogether (read more here). This new Paris production is completely the opposite, remarkably perceptive about the opera and its meaning.

When Nixon arrived in China in 1972, he was entering completely alien territory. China was an unknown entity to the west. America, at the height of its empire, was confident of its place in the world. Then suddenly, Nixon and his entourage were rocketed into another empire, where American values had no place. They might as well have been time travellers in a sci fi situation. No stupid Air Force One prop here. Nixon and his team materialize in Beijing like visitors from another planet.

Forget what Sellars said, even though he was instrumental in the creation of the opera. John Adams Nixon in China is infinitely more nuanced, whether he or Sellars realized it or not. Perhaps Adams intuited the meaning of the opera more deeply than he realized.  Chen Shi-zheng's production gets to the soul of the opera. No silly reproductions of newspaper photos, instead a set as stylized as the interaction between the two sets of politicans. They are playing a kind of psychological chess, sizing each other up in a formal game of greetings and entertainments.

Sellars steered well clear of meaning by focussing on decor. For Chen, meaning is the whole purpose. The set is simple, but exquisitely beautiful. Glowing gem-like colours which evoke the colours of China - blue greens, azure, red and gold. The two teams of protagonists stalk each other, probing emotionally. Mao himself reveals nothing. He conquered China by being devious: even Zhou Enlai has to watch his back. Nixon knows he's out of his depth, but that's a credit to him. No gunboat arrogance, no shouting at the natives. Compared with modern politcians, Nixon was "no crook".  In Chen's production, Pat Nixon's role is very well developed. She's a sensitive soul who believes what she's told to believe. She's a perfect politician's wife, turned into an emotioinal Barbie Doll for display purposes. When  she comes to China, her cultural bearings are lost and she responds as a human being to the ballet enacted in front of her.  In the process of their China journey, Pat and Nixon learn something of themselves and of the wider world.

This brilliantly intelligent production lifts John Adams opera onto a greater level. Apart from being psychologically more astute than the Met production, this Paris production is infinitely more musically perceptive. Adams's series of repetitions and patterns replicate in the stage movements and choreography. When you watch the rows of uniforms intricately weaving and counter-weaving, it's like hearing the music come alive. Telling details, too, like the Little Red Book turning into streams of folded red paper as the cadres chant slogans.


Performances are good: indeed the fact that few of the performers are English speakers helps a lot to create atmosphere. Two more days to catch this amazing production on arte.liveweb. Don't miss it. Please also read my analysis of the Met production  and also watch the original ballet on which  the ballet in the opera is based. Full download of The Red Detachment of Women HERE. It does make a difference to know the original ballet, because it's a stylized telling of a very real story of the struggles Chinese people had to undergo. It sets Maoist China into context. It's also a ballet of women's liberation, to which Pat Nixon responds.
at July 15, 2012

Thank you so much. I saw the Met production in a movie theater. This was in many ways, as you say, so much better.