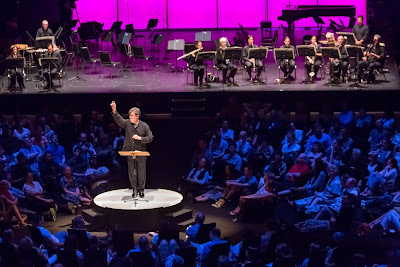 Music as spatial experience: Philharmonic 360 with Alan Gilbert and members of the New York Philharmonic Orchestra. "Philharmonic 360", because the musicians were embedding the music 360 degrees round the whole performance space. Conceptually, it was brilliant, a reminder that music isn't confined to 19th century concert halls. Sound came from different parts of the auditorium, audience and musicans integrated, not artifically segregated. Lit in neon pink and sapphire, people loomed out of the darkness. At the centre, Alan Gilbert stood alone, under a single white light. Obviously they had the sightlines right, and Gilbert was clearly communicating with his players, but the effect must have been quite magical. Great theatre!

Philharmonic 360 started with Giovanni Gabrieli's Canzon XVI. A fanfare of three sets of five brass players, calling out to each other across space. Sixteenth century music was often heard 360, in the round. Although this isn't opera as we know it, the quintets function as voices, communicating with each other. Alan Gilbert is no fool. He was preparing the audience for two monumental pillars of modern repertoire,  by connecting them to music history. Even audiences who aren't familiar with new music can appreciate it in this context.

Gilbert was wise, too, to choose Pierre Boulez's Rituel in memoriam Bruno Maderna as the centrepiece of the programme. Like Gabrieli, Maderna was a Venetian, and grew up aware of the function of music in society. It's significant, too, that Luigi Nono, who also pioneered music with spatial dimensions, was also Venetian. Gilbert's choice of programme was an inspired reflection on the interrelationships behind the piece, and also on the intricate connections within the piece. 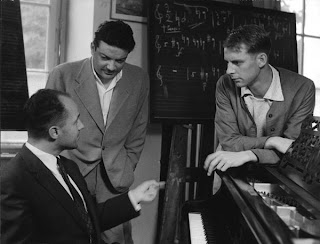 Boulez's Rituel commemorates Maderna on many different levels. On an obvious level, it's a ritual procession. The orchestra is divided into eight unequal parts, moving at different paces and in different ways, just as mourners follow a cortege, seemingly disparate but with common purpose. Solemn percussion, often hollow, evoke the image of a funeral, but also serve to measure time and its inevitable passing. This percussion functions like a heartbeat, so the sudden interruptions, changes of direction and pauses feel organic. Boulez's Rituel has been heard as a commentary on Maderna's own music and his place in music history, yet it's also psychologically intense, as if through the formality of the structure, Boulez is coping with extreme emotion. Maderna was like a father figure to Boulez, and was instrumental in persuading him to conduct as well as compose. Anyone who still swallows the myth that Boulez is cold and clinical needs to listen to Rituel. Significantly, solo clarinet functions prominently, weaving past the regulatory percussion, like a lone mourner wailing. I've often imagined Rituel as if it were a chorus in a Greek tragedy, for it sounds primeval. Superbly disciplined playing from the orchestra, so the complexities in Boulez's score are clear, as they should be, throwing its deeply-felt spirit into high relief.

The picture above shows Boulez (seated) with Bruno Maderna and Karl-Heinz Stockhausen in 1955, around the time Stockhausen's Gruppen was wriiten. It's such a classic that it's hard to believe how advanced it was for the time. Three orchestras functioning as independent units, the music as much in the convergences and breakings away as in the separate parts. On this occasion, Gilbert was joined by Magnus Lindberg, no less, formidably important, and by Matthias Pintscher, less famous perhaps now, but still young . (lots about him on this site). Pintscher is moving heavily into conducting, so again, Gilbert is ahead of the game, picking Pintscher to work with.  What a constellation. Sorry, I couldn't resist that dig at Stockhausen's later preoccupations, which distract from the visionary innovation in his work.

Stockhausen's Gruppen is powerful, conceptually and musically. It was written to work in conjunction with the performance space where it happens. At the Royal Albert Hall in 2008 (read more here) it was an overwhelming experience, almost cosmic, "beyond" mere music. A close friend was at the London premiere in 1967, also at the Royal Albert Hall, listening from up in the gallery. Perhaps the Park Avenue Armory in New York doesn't do it justice, for this performance didn't come over nearly as well as Boulez's Rituel.

Sandwiched between Boulez and Stockhausen was Mozart! This was the real test for the audience. Would they figure out why? Choosing the ballroom scene that ends Act One of Don Giovanni was a stroke of genius on Alan Gilbert's part. No gorgeous extended arias, but instead, tightly crafted ensembles. The three groups of protagonists converge upon one another, some hidden behind masks, others pretending to be what they are not. Mozart defines the parallel groups with three seperate small ocrhestras, each operating as a unit, but together creating a coherent logic. Mozart's writing Gruppen 200 years before Stockhausen!

It would be a complete mistake to judge this bit of Don Giovanni in conventional opera terms, because it wasn't being presented as opera as such, but as an example of spatial music. The stylized, witty staging was sending out signals. It didn't matter that the singing was so basic. What we were supposed to be listening for was the orchestra, and how deftly Mozart constructed the music.

Philharmonic 360 ended with Charles Ives The Unanswered Question. The question is answered in the programme! The Unanswered Question is an 8 minute study in disparate parallells, three orchestras and  flute quartet. Ives's Fourth Symphony might make the point better, but it's too long and ambitious to fit into a programme like this. And it aso shows Alan Gilbert's sense of humour, for it's a companion piece to Ives's Central Park in the Dark. Both were titled "Contemplations", of Nothing Serious and Serious, in Ives's wry irony. Some in the audience at the Armory in Central Park must have known! How wonderful to emerge into the night, hearing the diverse sounds of the city.

Any conductor can throw together a programme but very few indeed do it with Alan Gilbert's erudition and wit. Any conductor can keep an orchestra (or multiple orchestras) from falling apart, but it's a rare gift to have a conductor who can communicate like this and develop the audience. Often, as an outsider reading the NYC press, I wonder at what poiltical battles are happening behind the scenes, and why the negativity toward change. NY needs Alan Gilbert. If they don't appreciate him, it's their loss. Watch this programme streamed on medici.tv. The filming is done by a crew who know what to focus on, without losing the big picture. Which is what Philharmonic 360 was all about.