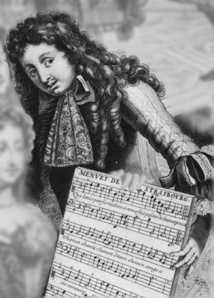 Broadcast of Marc-Antoine Charpentier David et Jonathas on arte tv on Friday 13th HERE. Les Arts Florissants conducted by William Christie, which makes it a major event. Pascal Charbonneau, Ana Quintans head the cast. It's a completely new production directed by Andreas Homoki who's taking over at Opern Zurich later this year (so you need to know). This is the baroque event of the year (so you should not miss).

It clashes with the First Night of the Proms, but is by far the classier event. Indeed, it's the main draw at this year's Edinburgh Festival, which features an ambitious baroque programme. I was sorely tempted to splash out and travel, but decided to reduce carbon emissions when I heard that Arte was sponsoring Aix.

What is the future of classical music? Is the way ahead dumbing down, even to the extent of dumbing down music itself? Maybe. But David et Jonathas is fairly rare and hardly hoi polloi. Instead of dumbing down, Aix and Arte raise the bar, in the faith that audiences will rise to the challenge. Another reason to thank the gods for a good education system and public funded arts management. This David et Jonathas is likley to beome the benchmark and recoup its costs on DVD over the years.
at July 12, 2012