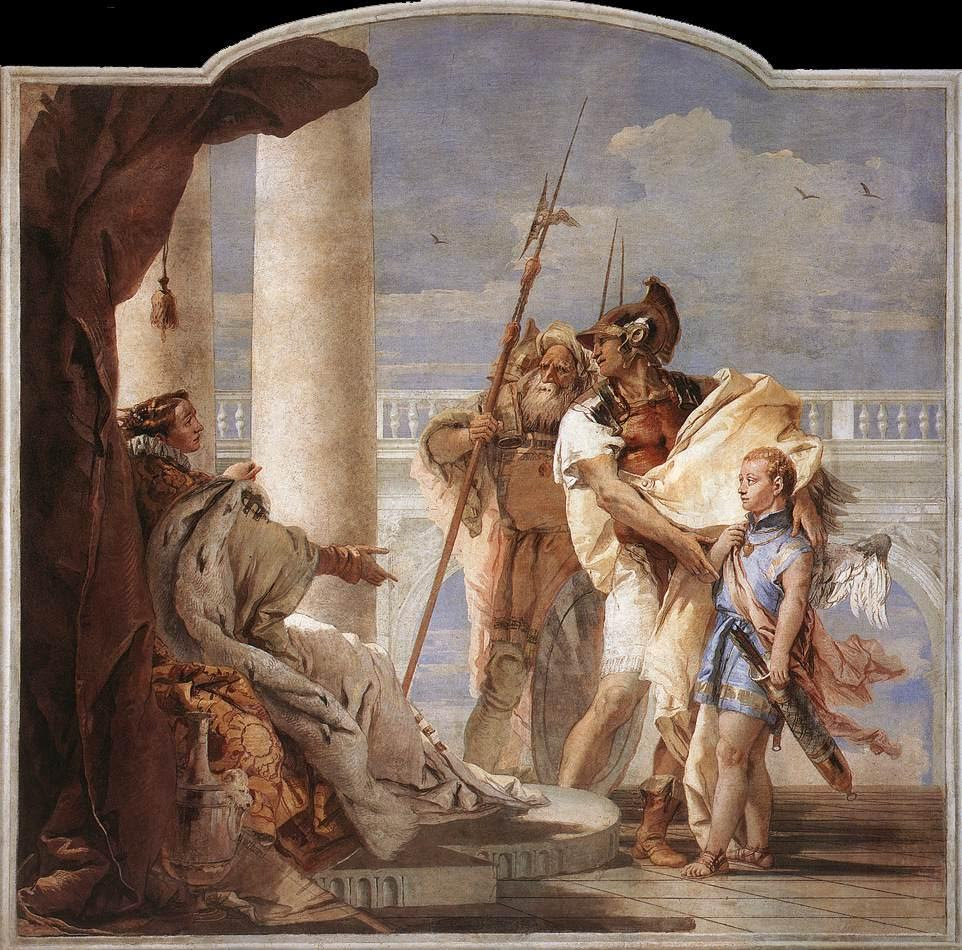 Berlioz The Trojans (Les Troyens) came to BBC Prom 11 barely two weeks aftere its sell-out run at the Royal Opera House. This made a difference because all involved were still so fresh that the concert performance had the energy of true theatre, but without the constraints of staging.

By the time Troy falls, Virgil tell us that the hero Aeneas (Enée), has already had many adventures, with Gods and monsters. In this painting (Tiepolo), Enée introduces his son to a very un-Mediterranean Dido (Didon). The kid's wearing wings because a goddess has turned him into Cupid to break down Didon's vow of celibacy. Antonio Pappano's approach thus captures the adventure that characterized Enée's past. The Trojans can be done as a formal studio recording, but it's much more idiomatic when imbued with this innate sense of theatre. Pappano and his orchestra have already proven themselves at the Royal Opera House. Now they can, like Enée, take more risks. If anything, this Proms performance was freer, more spontaneous and closer to the spirit of Berlioz's audacious vision. 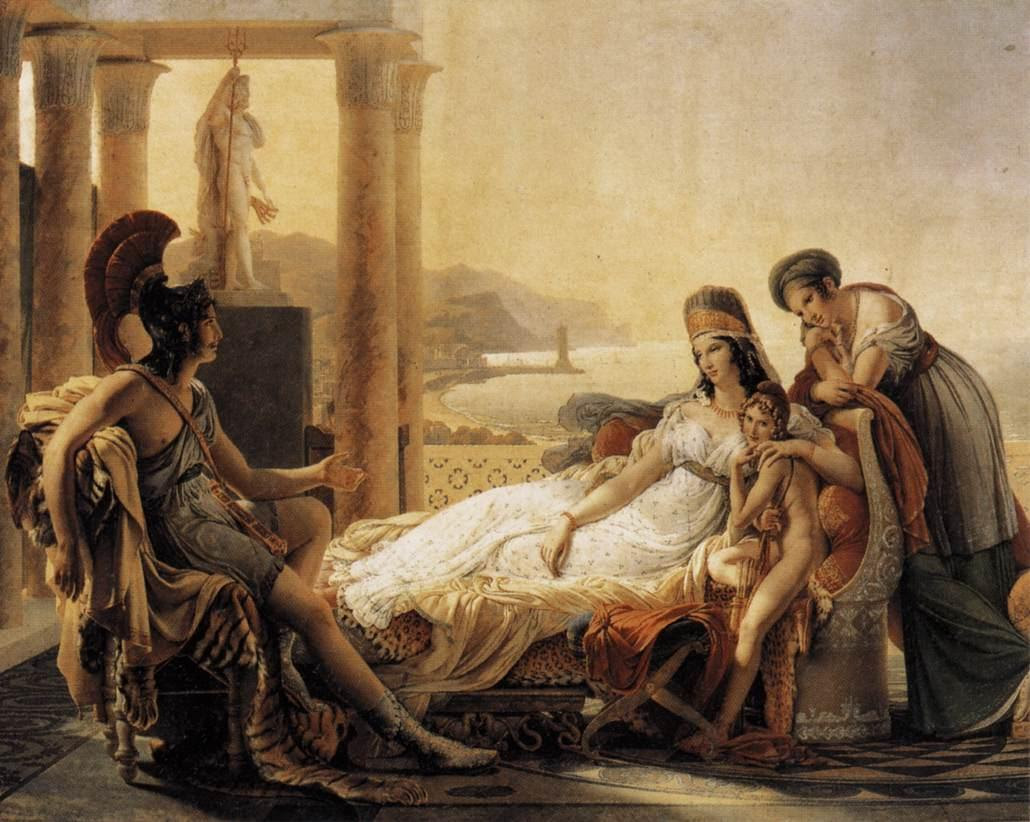 Significantly, Berlioz eschews the full Aenied saga. The scenes in Troy have such cataclysmic drama that they almost overwhelm, but they set out the background to what Berlioz is much more focussed upon. Didon, Enée and their people are refugees from different destroyed civilizations who meet in a place of temporary refuge. With his ability to write flamboyant pictures of excess, he throws us off balance by concentrating on the relationship between the two main characters. It may seem like an anticlimax to hear Didon (Eva Maria Westbroek) sing happily with her contented subjects, but Berlioz is deliberately creating a contrast between militarist warfare and domestic peace. Having lost Tyre, the people of Carthage are grateful for what they'e achieved. Didon is not Cassandre, but almost her opposite. Anna Maria Antonacci is a more "dramatic" singer, but Westbroek's warmth is exactly what makes Carthage so alluring to the dispossessed Trojans. Performance doesn't exist in limbo but grows from interpretation. 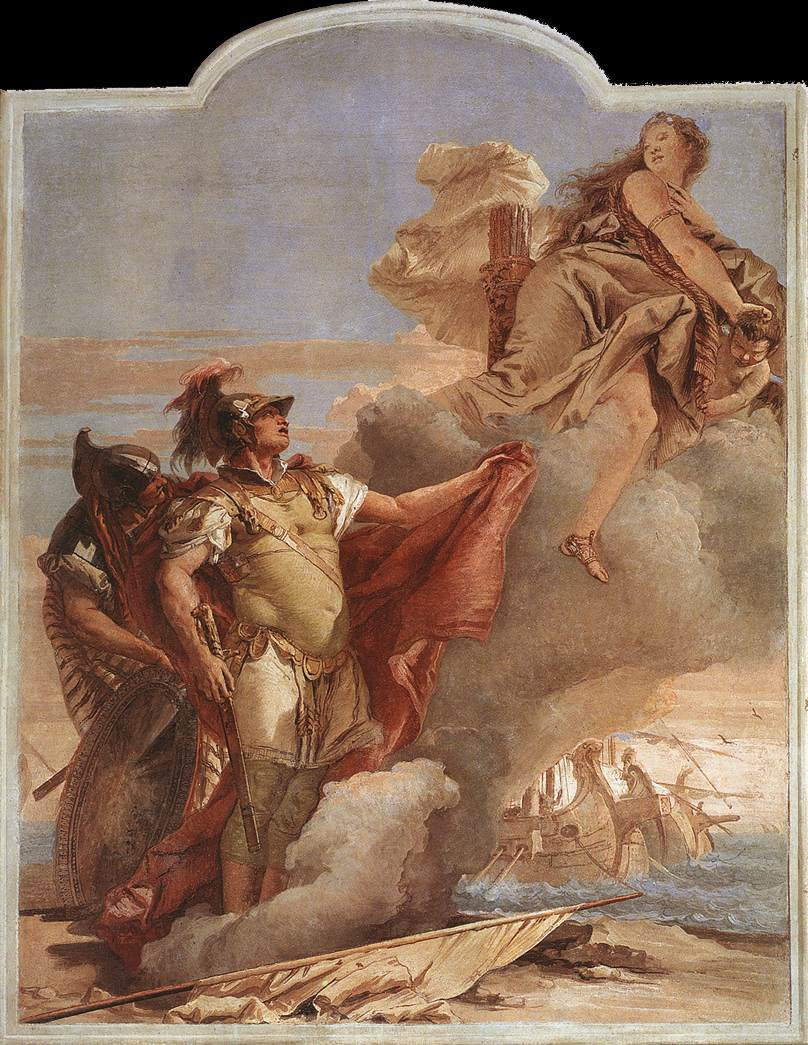 Didon and Enée are driven from the hunt by a storm, but it's not the storm that matters but the calm haven within which they shelter and fall in love. The duet Nuit d'ivresse is at the heart of the opera in many ways. Again, intimacy and understatement mean more than showily extravagant singing. All theur lives, these two have lived for the public, so to speak. At last, under cover of night, they can be themselves. Bryan Hymel's Enée is a good counterpart to Westbroek's Didon because they create the parts with such sincerity. Empires and glory have nothing on love, so the emphasis here is on naturalness, not histrionics.  The greater spontaniety of the Proms performance caused a slight wobble in Hymel's long  Inutiles regrets, but it added to character. Enée's heart breaks at the prospect of leaving Didon, but it is the crucial, soaring climaxes that show his resolve. Hymel sang this with flawless poise, faced as heroically as Enée faces his fate. Hymel is only 32, with great potential. Most of this cast are very young indeed, and enthusiastic, which gives this production its vigour.

Berlioz writes many vignettes into The Trojans to display his virtuosic command of form. In concert performance, continuity is less important, so we can indulge in the vignettes for their own sake. Ji-min Park's O blonde Cérès was magical,  and  Ed Lyon sang Hylas's Vallon sonore so movingly that I thought of the Steersman in the Flying Dutchman. Also firmly portayed, Hanna Hipp's Anna and Jihoon Kim's Hector. In the interludes for ballet, Berlioz demonstrates how he can write exotic, pastoral and orientalist portraits. Pappano and the orchestra delineated these vividly, showing how important they are to the fabric of the opera. Having heard this Les Troyens live on stage, in film and in concert, I'm convinced that this is one to cherish. It's human scale, not bombast, its warmth and naturalism informed by its insight into the meaning of the opera. True, this is an epic tragedy, but it wouldn't be quite as poignant if we didn't empathize with the personalities. Please read my review of the ROH performance, and the film broadcast - all different. See here in Opera Today for the synopsis, libretto and a non commercial stream conducted by Sylvian Cambreling.

I'm glad it made you think of the Steersman, as I will be singing it at the ROH in 2015! Ed

Hooray! The Steersman is a much more interesting role than it gets credit for.