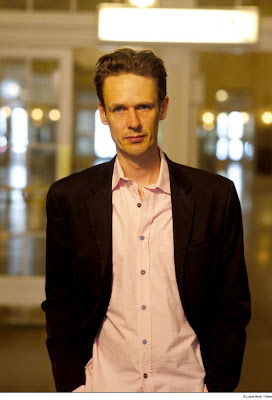 Hans Werner Henze's Six Songs from the Arabian is a masterpiece,  perfectly tailored to Ian Bostridge for whom it was written. It captures the unique qualities of Bostridge's voice which so intrigued the composer, who could recognize originality when he heard it.  Thirteen years ago, Bostridge and Julius Drake premiered the cycle at the Wigmore Hall,  so it was fitting that it should feature as the finale of the current Wigmore Hall season.

Henze is a dramatist, and each of the Six Songs from the Arabian is a miniature drama. Selim the seafarer laughs as he sails into a storm. Drake makes the piano growl and rumble. This is a psychic storm, whipped up by supernatural beings. Henze quotes the witches' song from Goethe's Die erste Walpurgisnacht. It's a reference to Bostridge's doctorate in witchcraft studies, and to the undercurrent of cosmic chaos that runs through both Goethe and Henze. The piano part rumbles, then breaks into choppy ostinato. "Sieh, da flammt, da zieht das Böse!", Bostridge cries out of the silence, the key word "Böse" leaping out of the line like a whip of thunder. "Es pfeifen die Windsbräute, heulen und scrheiun" (Henze's text). Selim is shipwrecked. The storm is also a reference to Prospero and Caliban, to Bostridge (who was to create a magnificent Caliban in Thomas Adès The Tempest) and to Henze's interest in Britten, Britain and Shakespeare. Suddenly the storm stops and the true horror sinks in. "Selim, ach, Selim", growls Bostridge sotto voce, "was hast du gemacht"?

Similar multiple references in Die Gottesanbeterin.  Henze writes this as an arabesque, with exotic melismas that suggest Islamic prayer, for Selim needs divine help. Henze is also establishing an "oriental" otherness. The text describes a praying mantis. It's a reference to Alberto Giacometti's sculptures, to the insect with its hard exoskeleton, and to mating rituals that end in death.  Henze writes with symbolist intensity : the insect, for example looks powerful but is vulnerable within. "I am not praying" says the seductive female, "I seize my lover and subdue him at our wedding feast". Henze has said that Selim and Fatuma were real people he knew in Kenya. What must he have observed from their relationship?  Their lives were humble, but Henze gives them mythic status/ The song is not a poem but a monologue where phrasing is critically important. This is where Bostridge shows his virtuosity, his voice curling round words then spitting venomously as he describes the heterosexual act. There's little room for rest, since the lines twist and turn in one long sequence.

To emphasize the supernatural trauma, Henze does not follow normal syntax, stressing words for their musical quality. Hence stresses on words like "Baum" "das", "schreit", "auf" to throw the listener off track. Bostridge knows that the last thing Henze wants is for these songs to be delivered in a straightforward manner. I've heard this cycle done as "normal" song, which completely misses Henze's point.  The composer knew that Bostridge understood.  Ein Sonnenaufgang describes sunrise over a desert Neimansland where volcanos shoot lava (also a reference to the insect ritual) and jewel colours are bleached white by the overpowering heat of the day to come. Drake plays adamant, sharp chords. Bostridge's voice elides and twists round Henze's bizarre legato. Landscape painting this is not.

At this stage in the cycle, Henze introduces Fatuma, though one might say that she's present in the praying mantis and in the female witches in the storm that destroyed Selim's ship. Cäsarion is also a reference to Shakespeare, Ceasar and Cleopatra, and power struggles of war and love. Again, Henze plays on words like "Runen", "unendlichkeit" and "Sensucht", stretching the vowel sounds so the voice resembles the call of a muezzin, reaching out over vast open spaces. Henze also references the European tradition of a dance of death, in the wildly rhythmic piano part. As Drake beats out the ritual dance, Bostridge's voice sails forth in long, keening lines: the contrast reinforcing the spirtual struggle in the cycle.

"Weh!" cries Bostridge as the mood switches to Fatuma and her side of things.  She loved Selim, but he brutalized her and cast her our to die in a cave where the life giving sun cannot reach.  "Fatuma genannt, die schonste Fatuma in ganzen Land", Henze replicates Selim's cruelty, making Bostridge sing superhumanly extended lines. I once counted the number of ululating aaaaaaaaa beats in these lines, astounded by the vocal gymnastics Henze puts Bostridge through, knowing he can deliver. It's the cry of a wounded Fury, a wild animal making one last gasp. In Fatumas Klage, Henze connects to the women in Die ertse Walpurgisnacht, and to all victims of cruelty and injustice through history. One could possibly read a whole political analysis into this work. Bostridge wrote that witches were victims of conformist societies who were threatened by those who were different. Henze experienced a form of witch hunt himself. This work shows how Henze's socialist conscience remains undimmed.

What does this cycle mean, with its intense, elusive symbols? Henze concludes with a poem by Freidrich Rückert, just as he began by quoting Goethe. Das Paradies is a fairly undistinguished poem, where the phrase "reiche mir dein Hand" ends nearly every line. Henze turns this weakness into a strength. He makes the phrase into a natural chorus, repeating like the waves beating on the beach where Selim washed ashore. He writes the phrase so it recalls the long aaaaa's and ooooo's that have gone before, but not the deliberately disjointed synrtax. At last, the significance of the Imam prayers is revealed, in secular context. "Meiner Erden Reisen is bedroht vom Fiend, wehre seinem Hasse, reiche mir diene Hand". In his spiritual maelstorm, Selim beats up Fatuma. Perhaps Henze is suggesting that an alternative might be to reach out and touch in a non-violent, non-erotic way. The turbulence that went before gives way to relative simplicity.  It's a moving tribute to the value of friendship.

Since Bostridge and Drake first recorded Henze's Six Songs from the Arabian in 2001 (buy it here), Bostridge's voice has developed and life experience has added immense maturity to his interpretation. This performance was an astounding tour de force, infinitely deeper than before, the technical challenges overcome with ease. Henze was right. Bostridge can bring out the surreal, psychic intensity in the Six Songs like no-one else. This concert was recorded, though there's no mention of for whom. If there'll be a CD release, grab it and marvel.

Bostridge should also be praised for the brilliantly intelligent concert programme itself, the culmination of his Wigmore Hall series "Ancient and Modern".  In the first half, he combined John Cage's Seven Haiku for piano  with Schubert's Four Rückert Lieder in a new arrangement for piano, guitar and voice by Xuefei Yang, and Britten's Songs from the Chinese. John Cage believed in the role of random chance. Each of the three times Cage's Seven Haiku were repeated they took on the coloration of what they were heard after. Cage felt that what we process what we listen to based on our expectations and experience. Beautifully pristine playing by Julius Drake, 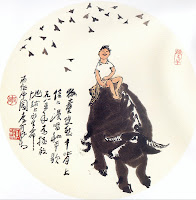 Xuefei Yang's transcription of Schubert for guitar were good. Schubert loved the instrument dearly and wrote for it.. Henze is one of the greatest modern composers for guitar, as did Britten. Yang played her lithe transcription with sparkling grace, so one could hear the connection between guitar, pipa and erhu, a stringed instument that often seems to sing like voice. This was particularly apposite for the Britten Songs from the Chinese op 58, where Britten captures the spirit, though not the form, of Chinese music.The Songs from the Chinese were written after Britten's visit to the Far East but reflect his lifelong interest in non-western music.  These influences are obvious, and cannot be underestimated, though they're ignored by those who don't know their Britten. Please read my piece on The Prince of the Pagodas and on Mervyn Cooke here.

In The Old Lute, Britten evokes not a western lute but the sound of the Chinese pipa, which is quite different. Yang's delicate playing suggests that Britten knew exactly what a pipa should sound like. Those who haven't heard the pipa miss out on the subtlety of Britten's writing. Henze was greatly influenced by Britten, and understood the strangeness that lurks behind Britten's music which many performers miss, no matter how superficially correct their singing.  It's not for nothing that Henze fell in love with Bostridge's voice after hearing him sing Britten at Aldeburgh in 1996. Henze's extensive experience in writing for voice meant he could appreciate how unique Bostridge is, and inspired him to write music no-one else can do justice to.

There'll be another review of this concert by Claire Seymour in Opera Today.Please explore this site, more on Britten, Henze, Bostridge, Schubert and Lieder than any other