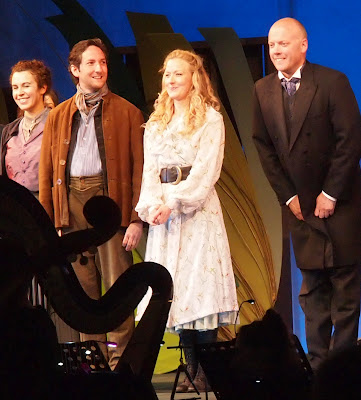 Benjamin Britten believed in the value of community opera. Albert Herring, for example, works well when it's performed by the "ordinary" townsfolk it depicts. Next year, the Aldeburgh Festival is presenting Albert Herring in Britten's birthplace, Lowestoft, with local participants.

Community opera is a genre in itself, with its own rationale and values. It brings communities together. All kind of people contribute : everyone gets a chance to enjoy and be creative. Even the big houses like Glyndebourne and the Royal Opera House have education programmes that reach out to new audiences. Britten was right : community opera has social purpose.

John Barber's Eleanor Vale at Wedmore Opera fills the brief.  Large choruses and crowd scenes, so everyone gets to have a go. Big scenes for the children, who are clearly having a wonderful time and will treasure the experience for the rest of their lives, as will their families. Barber's music is lively and full of variety, filled with witty allusions. Part of the fun is picking up the witty allusions clothed in Phillip Glass-like sonorities. Modern music need not be scary! Nor does it have to be difficult to sing, an important consideration in these circumstances. The libretto, by Peter Cann, is droll, shiny as an apple, but sharp, which makes the rot at the core of the plot all the more potent.

The main role of Eleanor Vale holds the whole opera together and gives the opera distinctive character. Eleanor Vale rides into a Victorian Somerset village astride a man's bicycle. Barber can write much more demanding music for Eleanor. She stands out from the crowd in every way. It's a role for a professional with a strong personality, for it is the backbone that holds the entire opera together. Sarah Minns creates the part perfectly, indeed I think it was written for her. She has a clean, bright voice with enough depth to convey the more sinister side of Eleanor's personality. Sweet charm shields savage menace. Crows end up dead on the doorsteps of human carrion eaters. Dogs that chase Eleanor's bike end up dead. Eleanor wreaks havoc on the small-town small minds who destroyed her mother. Minns, who is a regular at Opera Holland Park, Grange Park Opera and elsewhere, has the voice, stamina and personality to keep this opera afloat (perhaps not the best choice of words given what happpens in the plot).

Nicholas Sharratt sings Matty the Mender, who's "travelled as far as Bristol". He fixes bikes and tries to fix Eleanor but she's beyond mending. The best writing in this opera focusses on Eleanor, but the dialogues between Matty and Eleanor give both singers a challenge which they meet well. Minns and Sharratt (I enjoyed his performance in Maconchy's The Sofa in 2007) both have solid experience and interesting voices. They're both in the photo above, with Adam Green as the Headmaster. He's a regular at the ENO and in concerts, both in the UK and abroad. He was good, but the role wasn't big.

Wedmore Opera, founded nearly 25 years ago, shows great foresight in commissioning this new opera. Barber's Eleanor Vale is "Somerset local interest", which is good, and places Somerset on the repertoire map.  But it's an opera with basic human interest, which could transfer well nearly everywhere, Suffolk perhaps, and even London. The big crowd scenes can be cut down easily, when community participation isn't of the essence. The orchestra is small enough for Eleanor Vale to exist in chamber version. Indeed, it's almost like there are two operas here, one communal, another more concentrated version waiting to emerge. Perhaps they could co-exist?  Tighter focus would overcome the natural difficulties that come with amateur performance.  The punch in the libretto and score would hit harder if audiences could hear it more clearly. Ironically, away from the countryside, Eleanor Vale might blossom with the spark contemporary music specialists might give. Eleanor Vale shows that communuity opera can work when the basic concept is good. And the role of Eleanor Vale is a gift for a young, bright soprano, though it needs to be properly cast, as it was here. This is an opera that should be heard again.
at July 13, 2012

An excellent performance of this new dark, yet funny opera.
At times the orchestra drowned Eleanor's words, but this is a mnior criticism. Very evocative of the Somerset levels, excellent costumes, and simple but effective set. Well done to the whole team, professionals and amateurs alike.