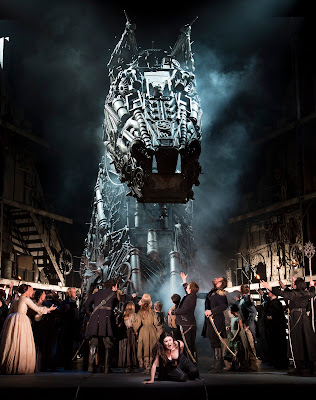 Hector Berlioz Les Troyens (The Trojans) is available from 9th July, online, on demand, free and internationally until October HERE on thespace.org.  Live opera and filmed opera are completely different, complementary experiences. Live, the David McVicar production was what the French call a spectacle, created to stun. On film, directed by François Roussillon, it reveals extra subtleties not visible on stage.

Always, I think, judge a production by how it reflects the composer and his ideas. So David McVicar's decision to set the opera in Berlioz's time absolutely connects to Berlioz and his times. Under Napolean , France conquered Europe. Under Napolean III, France was building an empire all over the world. This was a time of grand visions. So Berlioz is channelling the spirit of the times, creating an opera he hoped would outdo anyone else in sheer scale and audacity.

Hence the panoramic sweep, and the cornucopia of ideas in the opera. Just as Mahler would later speak of "a world in a symphony", Berlioz is creating a world in an opera. Hence the extremes, and the flaws. But that's what the world is like, it's not meant to be perfect. When we listen to Les Troyens, we should be listening to what Berlioz was trying to achieve, and the context of his work. The extravagance of this staging reflects the extrvagance, even the vulgarity, in the opera itself. It's not surprising that he never heard Les Troyens in full performance. Even by the standards of the time it was a blockbuster of cinematic scale. And after the war of 1870 and the Paris Commune, would audiences want to reminded of empires destroyed?  Understand McVicar's concept of the Second Empire and its analogy with the Trojans, and this production shows its intellectual depth. (It's certainly not just about the Crimean war as some suggest).

The opera happens on two continents, in Troy and in Carthage. The dichotomy is significant, in terms of style as well as in narrative. Which part means more in terms of the opera? In the first part, the Trojans rejoice, but are annihilated because they believe in the Horse. Thus the Horse as theatrical device is meant to shock and awe, and breathe fire. It's a symbol of war. Yet it's not just a machine. Wars are created by people. So the Horse here moves like a living being, and at the end, the figure of a mechanical man is seen, a silhouette of the  Horse in the background.

In the scenes in Troy, Berlioz goes for big effects. Cassandre dominates because only she can see what fate has in store. It's a role meant to be done with exaggerated histrionics, because that's in keeping with the heightened madness of the events. Some have commented on Anna Caterina Antonacci's semaphore acting, but I think it's appropriate. Berlioz wrote extremes into the vocal part, partly to counteract the tumult behind, but also, being a canny operator, he must have known that audiences go in for that sort of excess. There is no need for Antonacci to engage emotionally with the role as long as she projects it in extreme high relief.  Rather like the stylized depictions in Greek art. When Énée appears, he's automatically upstaged, by the turbulence around him and by the sight of Hector covered in blood. Good singing from Jihoon Kim, considering he's rolling on the ground.  I think Berlioz wants this because it emphasizes just how important the role is going to become later. The First Act is fantastic theatre, but what really counts in this opera is what happens to Énée after Troy is destroyed and the Trojans are forced to roam the Mediterranean as refugees.

After the bombast of the First Act, Berlioz is deliberately shifting gears. That's why Didon is written as a kind of Earth Mother, beloved by her nation because she's benevolent. Someone said to me that  Eva-Maria Westbroek doesn't  look Lebanese (where Tyre was), but so what? She's meant to be a contrast to the harrowed Vestal Virgin Cassandre. She has loved before and is mature. The gentleness in the part doesn't grab the audience by the throat as Cassandre's part does, but that's the point. Film brings out the graciousness in Westbroek's singing, and redresses the imbalance created by the two disparate parts of the opera.

Ultimately, Les Troyens predicates on how the two central characters relate to each other against a background of tragedy. The Trojans are dispossessed, and the Carthaginians threatened by the Numidians. Nothing is stable, even if Carthage is prosperous for the present.

After the bombastic extremes of the First Act, which are necessary to the plot,  we're conditioned to expect more of the same later, but is that what Berlioz wanted? Énée is a hero, so we expect action man histrionics. But let's not forget that Didon was a refugee too, and won't be fooled by fake heroics. "Je suis Énée", sings Bryan Hymel,  but as he recounts the sufferings of his people, he expresses the human face of the tragedy.  Énée wins Didon's heart because he's sincere, a good father and a sensitive man.  Because Westbroek and Hymel create their roles with such sensitivity, their Nuit d'ivresse is exquisitely beautiful. The set transforms into night sky, the city of Carthage revolving like a distant planet. The exotic colours are picked up by Antonio Pappano and the ROH orchestra. Truly memorable and intimate.

Flashy singing and acting might impress audiences on a superficial level, but Hymel's interpretation is much more psychologically correct. On film, we see tiny, subconcious movements which reflect the subtle vocal inflections. No director can teach a singer such detail. Hymel has  internalized the part on a very deep level. On the first night, everyone was thinking Jonas Kaufmann, and Hymel seemed to be pushing his natural timbre lower, possibly without realizing it. Besides, audiences nowadays aren't as used to high voiced heroes as was the case in Berlioz's time. French opera favours these voices, but we're also more used to German or Italian norms. On this film, made ten days later, he's settled better into the part which suits his tessitura well. He's done Énée before, and he's still only 32. Lots of potential. Listen to his long soliloquy where he prepares himself for his farewell. Technically this is difficult enough, but Hymel expresses Énée's inner conflict perceptively. Énée is a real hero because he confronts fate, knowing it will break his heart, and Didon's too. Listen for that final, heart rending flourish when he leaves. Berlioz lets Énée depart a warrior. "Italie! Italie!".

As for the final image when the figure of a man appears in the backgroiund, a silhouette of the Horse behind him, it derives straight from Berlioz's stage directions. "On voit passer devant le Capitole un guerrier couvert d’une armure éclatante conduisant des légions romaines". The hero will die but he will help found the Roman Empire. Carthage and Rome will fight, both eventually blitzed by history, as Troy was.

The ballet sequences on stage dragged, but the fault isn't so much with  the production as with our modern assumptions of what opera should be. The 19th century public didn't know or much care what North Africa was really like. For them orientalist fantasy reinforced their image of themselves as conquerors.  McVicar and his team are giving us the "real" Berlioz. It's we who have to adjust to the alien, instead of imposing our own wishes.  Which is the very nature of Imperialism. This Berlioz The Trojans, with its awareness of the hubris of Empire, is extremely deep, but you have to respect it on its own terms. Which is why you need to hear this broadcast.

Please also see my review of the first night HERE. There's a link to Opera Today's review HERE and a link to the libretto and free download (Cambreling, Paris 2006) HERE.