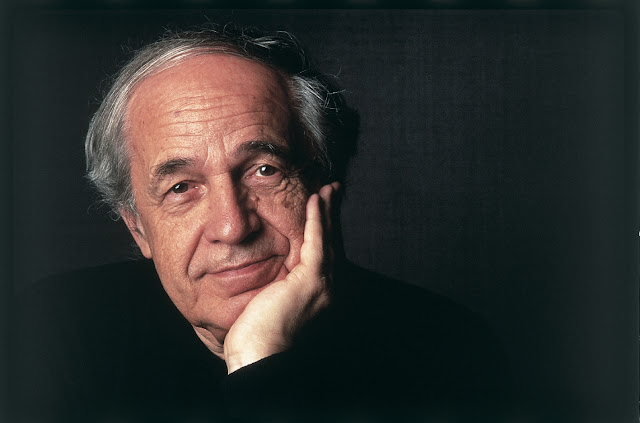 Pierre Boulez Le marteau sans maître is as important as  Stravinsky's Rite of Spring and Schoenberg's Pierrot Lunaire, said conductor François-Xavier Roth, who conducted it with members of the West-Eastern Divan Orchestra in Prom 17. Ironically, though Daniel Barenboim's Proms series features Beethoven, its greatest achievement long term may be in bringing Boulez to the mainstream. Barenboim is a man of courage and principle. He's confronted social injustice, and now he's challenging musical prejudice.

Boulez's Le marteau sans maître is a work for voice, though the singer (Hilary Summers) sings in only four of the nine segments. The work is a kind of meta-song. "Whereas Pierrot Lunaire is a theatre piece with instrumental accompaniment, the voice always prepondering" said Boulez in an analysis of the piece,  "Le marteau sans maître stems from the cell of a poem which is eventually absorbed in toto". In his early youth, Boulez was drawn to the poetry of René Char and wrote three cycles based on Char's work.  Le marteau sans maître  is thus crucial to any understanding of Boulez's career.

Char was a surrealist. In his poetry, images are compressed, as if by homeopathic distillation. The poet's brief phrases don't reveal meaning in the usual sense, but force the reader to respond intuitively. "Sudddenly", said Boulez, "You recognize yourself.... the illuminating paragraph seems simultaneously  to take possession of you, and to increase your potential, your grasp and your power beyond anything you had dreamed possible".

In Le marteau sans maître, Char's words are crystallized still further so their very relationship with obvious meaning  dissolves into the music itself,  like a droplet spreading concentric cirles in a pool of water. (Notice the limpid "water" imagery in the music). Words are used for musical quality, such as alliteration, and for emphasis. Boulez specifies that the singer is not a soloist. She sits with the ensemble, so the flow between players is uninterrupted. At the end, she intones abstract sound, almost the sound of body rhythms, and the flute (Guy Eshed) sings on her behalf, as had the viola (Ori Kam) before. It's significant that Char was anti-fascist long before the German occupation. On a very deep level, Boulez is reiterating Char's beliefs in the value of the individual against the mass. He uses a strict, almost mathematical structure of three internal cycles within the nine pieces and other more subtle interrelationships, but from this springs great freedom. Formality and ritual, but not repressive. Hence, the hammer without a master.

Yet how that "hammer" is wielded ! Instead of blasts of  masssed brass and percussion, the "aural violence" of the orchestral palette, Boulez uses a small ensemble, where instruments are carefully balanced in terms of pitch and timbre. Even lines are short, traceries of individual notes rather than full tutti.  Nor does he demand Lachenmann-esque distortions. These players aren't there to show off, but to co-operate. Boulez also employs instruments that suggest, but don't copy, instruments from non-western cultures. The guitar (Caroline Delume), suggesting the Japanese koto, xylomarimba (Adrian Salloum) and vibraphone (Pedro Manuel Torrejon Gonzales) suggesting gamelan and the African balafon. They exist, not as exotics, because they can express the non-dogmatic nature of the piece and its sparkling fragments, merrily moving together.  Even the percussion (Noya Schleien) employs no heavy timpani but a gong, maracas, bongos. On this occsasion I was struck by how Le marteau sans maître picks up on Messiaen's concepts. In a dawn chorus, many birds sing, but each is individual, and an astute listener can pick them out. In many ways Le marteau sans maître is also a precursor of Messiaen's Sept Haïkaï (read more here).

By choosing to showcase Le marteau sans maître in this Proms series, Barenboim is again making an extra-musical statement. This piece gives the musicians much more room to engage than the more complex Dérive 2 at the start of the series (more here) and it much more suited to their strengths.  Performance is a journey not an end in itself, as  a deep reading of this piece might suggest. François-Xavier Roth is a charismatic, slightly eccentric personality (in the best creative sense). He's sensitive to Boulez's idiom, and his rapport with the players was good. In  Le marteau sans maître, everyone's a player if they're listening properly.

Messiaen.... The music of Boulez and Stockhausen is often compared to Webern. I was always left scratching my head a bit by the comparison, although I can see where it comes from. It's good to see people make the comparison with Messiaen because it makes a far more enlightening connection, I think. (For example, it opens a door into grasping just how religious Stockhausen's music is).