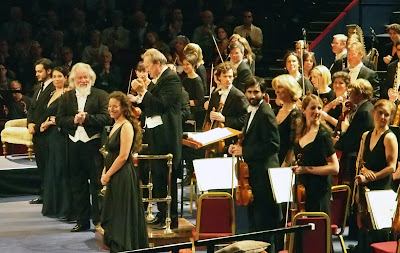 John Eliot Gardiner brought Debussy Pelléas et Mélisande to the BBC Proms (prom 3) at the Royal Albert Hall. This was a recapitulation of the 2010 production at the Opéra Comique, Paris. Gardiner conducted the same cast.  Only the staging (Braunschweig) was missing, though you could spot resonances of it even in concert performance. (Listen online here for 7 days)

Pelléas et Mélisande can be interpreted in many ways, for its very nature is oblique. The Orchestre Révolutionnaire et Romantique have a very distinctive sound. It's not instrumentation so much as idiomatic style. Gardiner creates an almost luminous account that seems to shimmer with the light and haze so integral to the story. Heat lies heavily on this opera, suffocating the inhabitants of the castle into psychic stupor. It's high noon in the garden by the well where Mélisande teases Pelléas and throws her golden ring into the depths. Who is Mélisande, and what does she represent?  As Gardiner conducts the interlude that leads into this scene, the orchestra creates Mélisande in sound - high, bright textures, limpid sonorities that suggest water, depth and danger. From this halo, Karen Vourc’h's voice emerged, exotic and elusive.

Gardiner, like Boulez before him, understands Debussy's extreme contrasts. Light and dark, oppressive heat, morbid dankness. Note the images : tower, well, caverns, linked by the symbol of Mélisande's long hair. Pelléas can't breathe underground. He's a creature of light, like Yniold, while Golaud inhabits depths. Laurent Naouri's Golaud was forceful, while hinting at Golaud's many inner fissures. He recognizes in Mélisande something he needs, but cannot comprehend why. In the forest scene, he faces away from her as if he's afraid of her power. In a fully staged production this makes sense, though less so in concert staging, where the voice is somewhat lost to the side of the hall. But Naouri is so good that he fills space with presence. Golaud as anti-hero: quite an achievement.

Phillip Addis sang an elegant Pelléas. very well attuned to Vourc'h's Mélisande. I can't forget Stéphane Degout's extraordinary Pelléas at the Opéra Bastille production in March 2012.  When we assess performance, we're always influenced by factors other than the performance itself and need to make a concsious effort to appreciate the actual performance on its own terms, not on our own. Addis is good and it's not his fault, but mine, that I imprint Degout. When Addis sings with Naouri, their balance is excellent : that's praise indeed.

Nice cameos from Dima Bawab as Yniold, and from Elodie Méchain as Geneviève. But what can I say about John Tomlinson's Arkel? Granted the role is that of an elderly man, but even the most magisterial of singers can't do the part justice when they themselves grow old. Tomlinson still looks good, and acts well, and the audience exploded with applause.
at July 16, 2012